Nature in the City

Established on October 27, 1923 to control hunting and assert federal jurisdiction over migratory birds and tidal waters in a bird sanctuary previously created by the Province of British Columbia. Now valued for harbouring nature, biodiversity and species-at-risk.

Part of the Greater Victoria NatureHood, designated on July 12, 2017 by Nature Canada (formerly Audubon Society of Canada) to revitalize the sanctuary and connect urban Canadians to “Nearby Nature”, where they live.

Facing numerous challenges linked to its urban location, invasive species, disturbance by humans and pets. Low bird numbers compared to the past caused by habitat loss and degradation, overfishing of herring and other factors.

Decades of big and small restorations, cleanups and rewilding at numerous sites, including the construction of a large, regional Wastewater Treatment Plant in Victoria Harbour to be completed in late 2020.

One of three historic MBSs in Greater Victoria with Shoal Harbour and Esquimalt Lagoon. One of 92 MBSs in Canada under the tutelage of the Canadian Wildlife Service, Environment Canada, which supports Nature Canada’s NatureHood initiative.

In homage to J.Fenwick Lansdowne (1937-2008), renowned bird artist and former resident of Oak Bay who drew and painted several birds that occur in the sanctuary. Below: Marbled Murrelets (left) and Brant, in Birds of the West Coast, Vol. 1, J.F. Lansdowne, 1976, M.F. Feheley Pub. Ltd. Toronto 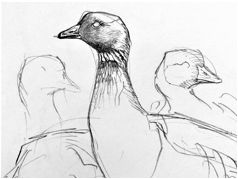